A rhinoceros remembers his life before grey captivity, one full of colour, with familiar smells and sights. He thinks of his mother being slain by poachers. He has searched the zoo but cannot find another like him. He fears he is the last. He describes a joyless life for all the animals with him, before being rescued and brought back home. The colour is brought back into his life when he realis-es he is not the last. Last evokes a longing for home from the reader and a sense of hope for the future upon its ending. In her debut as an illustrator, Nicole Davies effectively and beautifully portrays the differences in mood and surroundings between the rhinoceros’ life before and during captivity through her effective use of colour. 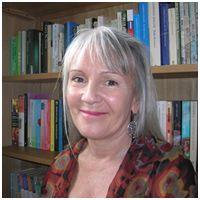 Nicola Davies has always had an interest in animals, training to be a zoologist before becoming a children's author. She has written over fifty books, published in more than ten dif-ferent languages. A First Book of Nature won the Independent Booksellers Best Picture Book. Last is her debut as an illustrator.
This website uses cookies to improve your experience. We'll assume you're ok with this, but you can opt-out if you wish. Cookie settingsACCEPT
Privacy & Cookies Policy